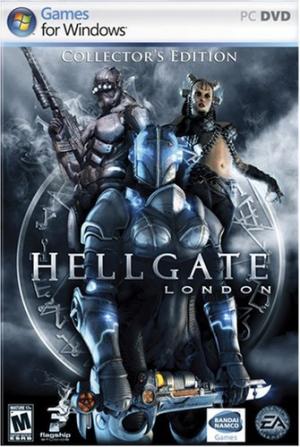 London, 2038. According to legend, when the ravens depart the Tower of London, it will crumble to rubble and disaster will befall England. As man became more dependent on science, believing only in what he could define or create, ancient knowledge and rituals were lost to the antiquity of time. Prophecies that had stood as warning for untold generations were seen as archaic folly or ignorant superstition. So, when the harbingers of evil began to manifest, few saw and fewer believed. When the demons finally came, there was little that stood in their way. Collector's Edition includes: Special Packaging and Art Design Hellgate: London Game in 2 DVDs Bonus Disc containing "Making of Hellgate: London" and Official Game Soundtrack Hellgate: London Map Poster 106 page Dark Horse Graphic Novel Unique in-game pet - Mantawraith 30-Days Free Subscription Alliance Iron-on Patch A Unique Dye Kit (Shadow Tiger, Kung Fu Bunny or Emerald Vengeance) From the Creators of Diablo - Flagship Studio was formed in 2003 by former executives and developers from Blizzard North, the creators of the worldwide, best-selling Diablo franchise. A New Perspective on RPGs - Uniquely combining the depth and customizability of Role-Playing games with the action of First-Person Shooters. Unique and Appealing World - Experience the ominous setting of post-apocalypse London. Choose Your Character - Fight against the demons of the underworld as a member of one of three distinct character factions (Templar, Cabalist, Hunter). Hell on Earth - Battle for survival against a wide variety of demonic enemies. Infinite Re-playability - With dynamically generated levels, massive quantities of randomly created items, chance events and story driven quests, no two gaming experiences are ever the same. Single-Player and Online Multiplayer Support - Hellgate: London definitely stands on its own as a single-player game, and it also provides a compelling cooperative multiplayer experience through a dedicated online gaming destination.