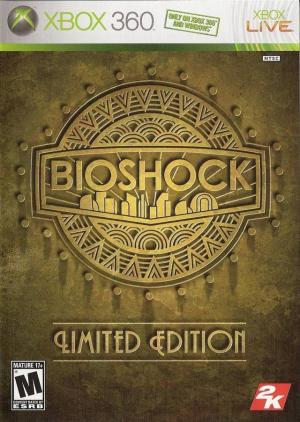 The BioShock universe is one of the most popular video game franchises of all time, and in “BioShock: Limited Edition,” you enjoy all the features, style, atmosphere, and narrative-driven storylines with an immersive, up-close-and-personal experience that combines elements of action and adventure in a horror-like setting. In this limited-edition version for the Microsoft Xbox 360, you explore the massive, open-world environments of the sinister and mysterious Rapture, an underwater lab that was once a utopia for scientists, artists, and industrialists. Incredible three-dimensional graphics bring this underwater world to life, and seamless gameplay allows you to navigate the game's challenges without interruption or ghosting. Moreover, highly intelligent and adaptive characters ensure different encounters throughout the game, and various customization options let you experience the game to your liking.In “BioShock: Limited Edition,” you journey as Jack to 1960 on board a flight over the Atlantic Ocean. His flight goes down, and he makes his way to a lighthouse in search of help. Inside the lighthouse is a "bathysphere" that takes Jack down into the miraculous land of Rapture. This is only the beginning of Jack's journey into a new land with hulking suits known as Big Daddy and little girls known only as Little Sister. A strange figure known only as Atlas helps to guide you as Jack on your game adventure. This is a journey that helps Jack unravel the mysteries of his own past. Many unique characters, each with their own games to play, guide, control, and confuse Jack as he explores the land of Rapture. Jack seeks to resolve the mystery hidden beneath the depths of the Atlantic Ocean in a land of buildings, shops, and corridors, all hidden beneath the waves. “BioShock: Limited Edition” is a game that excels in comprehensive world-building. Your character walks the lonely corridors, surrounded in their magnificent beauty. The land of Rapture is a true work of video game creativity, and an artistic masterpiece awaits you behind every door and around every corner. The music that plays throughout the game is suited to the in-game environment. Some tunes are suited to the era of 1960 while other sounds are made to accompany the unique world of Rapture. Visually amazing and aesthetically pleasing, the beautiful and mysterious world surrounds you while you walk and battle your way through doorways, shops, buildings, and passageways. Released in 2007, “BioShock: Limited Edition” was developed by the 2K Games studio 2K Boston, later known as Irrational Games. In the BioShock universe, gamers go on a fantastic trip in an amazing first-person shooter. With RPG elements, moral choices, and a largely steampunk-type atmosphere, gamers experience a unique and compelling alternate universe. This BioShock game for Xbox comes in a uniquely styled collector's edition box, containing the game and game manual, a making-of DVD, the original soundtrack, and a size-scaled Big Daddy figurine standing 6 inches tall. This figurine is an exclusive to the limited edition. Explore and fight your way to the discoveries you need to make in this exciting, challenging game.