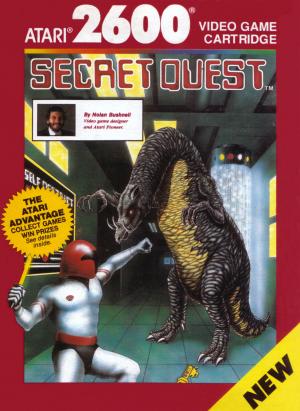 It started with one station, then three, then eight. If something isn't done, the aliens will overrun Earth. It is up to you to destroy the stations by setting their self destructs. You move from room to room, fighting any enemies you encounter. When you beat an enemy, you get an energy pod or oxygen bottle. Fighting aliens depletes you energy and/or oxygen so kill quickly. Each weapon inflicts different damage, and depletes a different amount of energy. As a rule, the stronger a weapon is, the more energy it requires. You also use oxygen at the rate of one bottle per minute while exploring. Along the way, you will sometimes find sonic keys, and energy sword, sonic blaster or particle beam. Sonic keys are needed for certain doors you encounter in later stations. Once you set the self destruct code, a clock starts and you must make it to the teleporter before the time runs out. The game ends when you destroy all eight stations, run out of oxygen or do not get off a station before it self destructs. If you run out of energy, the game does not end but you will not be able to use any weapon so you can't kill monsters so you can't replenish oxygen. Hence, the game won't go long if you run out of energy.