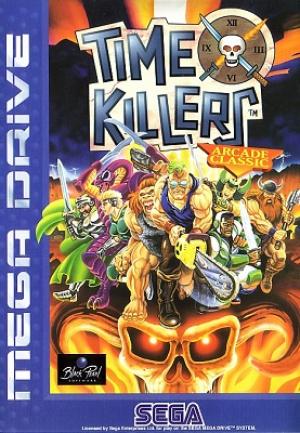 Time Killers plays much like Mortal Kombat, with some similarities to Street Fighter II. Rather than the standard layout of punches and kicks of various strengths, a specific button is used to attack with the corresponding body part: left arm, right arm, left leg, right leg, and the head. A stronger attack can be executed by pressing both limb buttons at the same time. The attack buttons involving respective arms and legs are also the basis of BloodStorm as well as Namco Bandai's Tekken series, the 2011 Mortal Kombat game, and Bio F.R.E.A.K.S.. If enough damage is done to an arm, it will be severed from the character's body, rendering it useless in combat. A character can lose both arms in the same round, forcing them to fight with only legs and head and depriving them of the ability to block. Damage can also be done to the legs, but they cannot be severed. The player may attempt a "Death Move" by pressing all five buttons at once. If successful, the attack cuts off the opponent's head and ends the round immediately; however, it can be blocked. A "Super Death Move" is also possible, but can only be executed while near a stunned opponent; the player holds the joystick toward the opponent and presses all five buttons, cutting off both arms and the head. Both of these moves differ from the "Fatalities" in Mortal Kombat in that they may be attempted at any time, rather than after winning two out of three rounds. Severed limbs and heads are restored after each round.