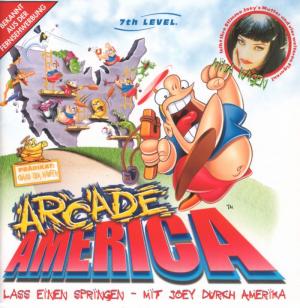 Joey and his pet monsters are going to a concert in Woodstock. Unfortunately, Joey has overslept, and his monsters have gone a little overboard in waking him up; their plan involved colossal amounts of dynamite. As a result, all the monsters have ended up all over the USA, and now Joey has to find them all. Arcade America is a humorous platform game where you control the rather overweight Joey. Each level consists of a couple of smaller micro-levels and is set in an iconic location within the States, such as Alcatraz or Las Vegas, and has its own specific enemies. The goal on each level is to rescue one of the monsters. While moving between levels, you take part in a crazy minigame where you control Joey's car as he drives towards the next area. While driving, Joey must avoid obstacles on his way, but he can also collect ammunition and shoot at the obstacles.