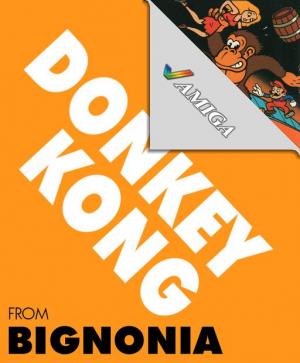 Donkey Kong is a Platform game and unofficial Amiga conversion of Donkey Kong by Nintendo. Game is developed and published by Bignonia as a shareware, which was released in 1993. Back in 1993, a shareware company called Bignonia ported Donkey Kong from the Commodore 64 to the Amiga. The final product closely resembled the arcade original in terms of graphics and levels (it includes the elusive pie factory stage). While the game is missing the between-level “How High Can You Go?” screens, it did add an extra stage that seemed to make some decent use out of the game physics. You are Mario, and that big old gorilla, Donkey Kong, has run off with your girlfriend. It's up to you to struggle up those ladders and balance on those beams to rescue your lady fair. She's held captive at the very top. But Donkey Kong is not ready to give her up so easily. He's tossing barrels and fireballs at you at every turn. It's up to you to outmaneuver that wily ape. Good luck, your lady awaits!