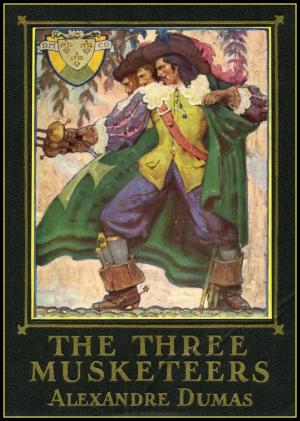 The Three Musketeers is a software conversion of the novel with the same name. The basic storyline involves a love affair between Anne of Austria, bride of the French king Louis XIII, and the Duke of Buckingham. Cardinal Richelieu wants to get her out of the way to ensure his own influence on the king. An opportunity arises when Anna sends a diamond necklace to the Duke as a token of love - exactly the necklace she is supposed to war for an important ball... Now the three musketeers Athos, Portos and Aramis - accompanied by the newcomer D'Artagnan - need to get it back in time. The player takes the role of D'Artagnan. The game plays mostly like a choose-your-own adventure game: the player reads verbose, written texts which are accompanied with static pictures. When it is decision time, the player gets presented with a few choices from which he needs to choose one, sometimes under time pressure. Only the correct choice proceeds the game. Sometimes the player needs to choose in which of the four cardinal directions he wants to walk, e.g. in a maze section.