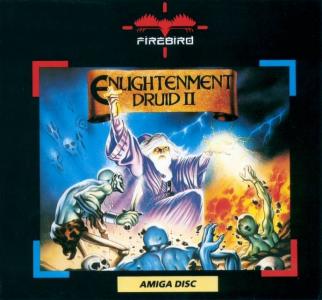 One hundred years after Hasrinaxx the Druid defeated the evil Acamantor, his nemesis is back, and although now older and having lost his Druid status after experimenting in black arts, he feels worthy of banishing this terrible foe. The gameplay uses a forced perspective top-down view, and strongly resembles Gauntlet in the way Hasrinaxx moves, shoots, avoids enemies and collects health items. Matters are more complex in terms of the spell system however. 32 spells can be collected and used, including a fireshield to allow you to pass fiery areas, water and fire walls to attack immediate enemies, a deathlight to clear the area of enemies, and a teleport. You can also summon one of 4 Elemental beings, who can be controlled simultaneously to attack creatures for you. Only 8 spells can be carried at a time, but you can drop and later re-collect them.