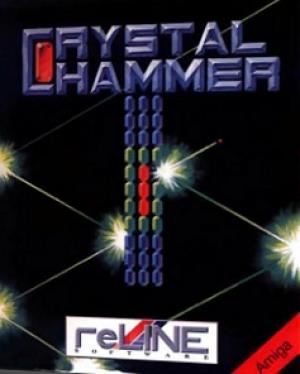 One of the Amiga's many Arkanoid clones, Crystal Hammer is perhaps best remembered by its intro tune, which has been remixed and covered by many. The game is all about reflecting a ball against a wall of bricks. Behind the wall of bricks live some worm-like creatures that will come out to disturb you when you've opened a hole in the wall. Prolonged contact with the creatures will kill your bat. Destroying bricks will often cause a coloured brick to come spinning down slowly. These spinning bricks are power-ups, altering your ball or bat according to their colour. You can have a sticky bat (green), a wide bat (blue), a slower ball (yellow), multiple balls (cyan), and the decidedly Arkanoid-inspired shooting bat (red). Whatever you do, don't pick up the grey brick, or you will be destroyed.