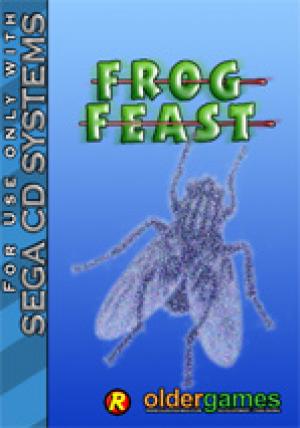 Frog Feast is an unlicensed/homebrew game by former RasterSoft programmer Charles Doty (though he continues to use the RasterSoft name). The history of its release is as of yet unclear (but its initial release is known to be 20 August 2005), but it is available as a purchase for many consoles and arcade systems, including the Sega Mega-CD, Dreamcast and the Sega System C2 arcade board. As with games like Doom, Doty has also made the source code available under a mostly-free license, though you will need a purchased copy of the game for the graphics and audio. A Sega Mega Drive version was also available at one point, but seems to have been removed (presumably in favor of the Mega CD version). The Dreamcast version has the dubious honour of being the most likely candidate for "Rarest Dreamcast Game Ever," with only about 20 copies estimated to be in circulation. However, the game was not professionally pressed and instead burnt to a CD-R on an ad-hoc basis, with a number of copies being released with bugs or faults. The nature of this production method makes it difficult to determine whether a copy is indeed a genuine edition released by Doty or simply a bootleg made by one of the original purchasers. However, this doesn't stop the game from selling for stupidly high prices, in spite of the fact that the game is generally regarded as not being very good.