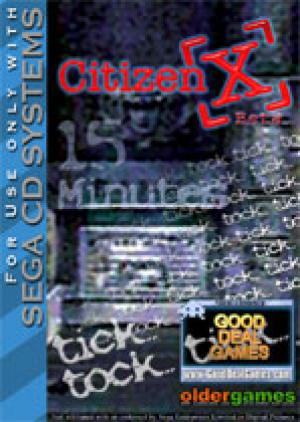 OUR WORST FEARS HAVE COME TRUE!! An elite terrorist organization lead by a madman has vowed to destroy the world as we know it. Saving the world might not have been in your weekend plans but things change. You are the only one left to take on a task which literally fell into your lap. A dying government agent begs you to continue her failed mission while handing you a hi-tech watch connected to the command center now giving you orders. Diseased sewer rats, psychotic circus clowns, mafia hitmen, and cannibalistic martial arts masters are just a few of the obstacles in your way. Let's not forget, you will still need to find the antidote to save the human race from biowarfare extinction! Oh yeah, one more important thing -- you only have 15 minutes... Citizen X is an unreleased Sega Mega-CD game developed by Digital Pictures. It was a side-scrolling action game paired with many full motion video cutscenes set for release in 1993. Though the game was not officially released, a mostly-finished prototype emerged and was distributed commercially by Good Deal Games in 2002.