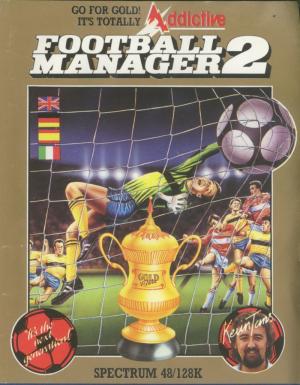 Following the sale of Addictive Games to Prism Leisure Corporation in 1987, Kevin Toms concentrated on creating a second Football Manager game.[18] Unlike the original BASIC only game, the sequel required machine code which meant working with a number of developers for various systems. For the ZX Spectrum version, this was Bedrock Software.[19] Unlike the first game that was stagger-released over a period of 5 years, Football Manager 2 was launched on all formats at the same time in June 1988, although it was available on a much smaller range of systems - Commodore 64, ZX Spectrum, Amstrad CPC, Amiga, Atari ST and PC. Unlike the first game, there was no customiser utility with the original release but in 1989, Football Manager 2 Expansion Kit was released, both as a stand alone release and packed in with Football Manager 2. As well as being able to rename teams and players, this offered the chance to start in division one or play in other leagues such as the 'Euro Super League' or as a national team in a 'World Championship'.