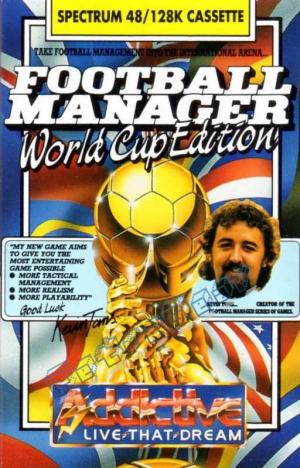 Football Manager World Cup Edition was again designed by Kevin Toms with various programmers for different systems (including Bedrock Software for all 8-bit versions). A main figure in the management of the game was lost and not replaced and with the deadline of the World Cup dictating the release date, Toms felt the game was rushed and unfinished. This was the last involvement Toms had with either the series or Addictive Games. The game was released in Summer 1990, to tie in with Italia '90, on all platforms Football Manager 2 had been as well as the MSX. The game was released in a 'big box' with World Cup wallchart and competitions including a chance to feature on the cover of the upcoming Football Manager 3 along with Kevin Toms (although this was never honoured as Toms had no involvement with that game).