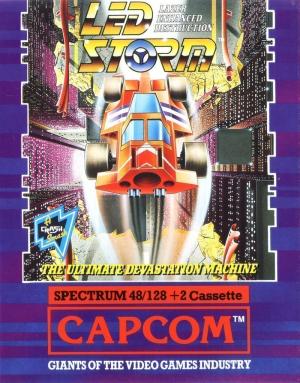 LED Storm, known as Mad Gear (マッド・ギア Maddo Gia?) in Japan, is an arcade game released in 1989. The acronym "LED" stands for "Laser Enhanced Destruction".It is a vertical scrolling racing game. The player has top view and control of the car for speed, left, right, and jump. The player races across various courses, and can force other cars off the road or jump on top of them. The game was ported to Amiga, Amstrad CPC, Atari ST, Commodore 64, and ZX Spectrum. During development, the game was titled Rally 2011 LED Storm (ラリー２０１１レッドストーム Rarī 2011 Reddo Sutōmu?)[2] and featured a different story, futuristic graphics and instead of selecting between three vehicles, the player had a vehicle that could transform between a car and a bike.[2][3] This version was eventually shelved and later reworked under Akira Nishitani's charge into its final release form as Mad Gear.[4] Except for the transformation feature, all ports of the game used features from the early built, including the player's vehicle being Storm 11.