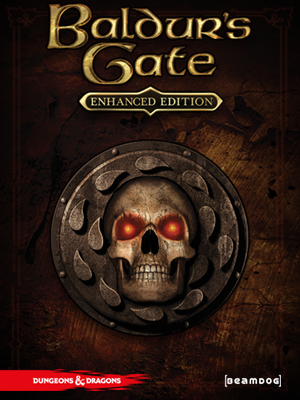 Forced to leave your home under mysterious circumstances, you find yourself drawn into a conflict that has the Sword Coast on the brink of war. Soon you discover there are other forces at work, far more sinister than you could ever imagine... Since its original release in 1998, Baldur’s Gate has set the standard for Dungeons & Dragons computer roleplaying games. Customize your hero, recruit a party of brave allies, and explore the Sword Coast in your search for adventure, profit… and the truth. Running on an upgraded and improved version of the Infinity Engine, Baldur’s Gate: Enhanced Edition includes the original Baldur’s Gate adventure, the Tales of the Sword Coast expansion, and all-new content including three new party members. Key Features The original Baldur’s Gate adventure Tales of the Sword Coast expansion New Adventure: The Black Pits New Characters: The Blackguard Dorn Il-Khan, Neera the Wild Mage, and Rasaad yn Bashir the Monk New player character voice sets Native support for high-resolution widescreen displays Over 400 improvements to the original game Improved multiplayer support with connectivity between all platforms