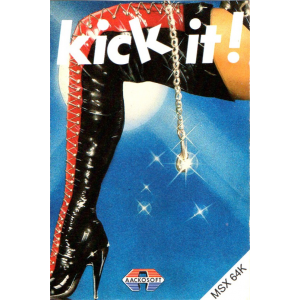 You are a pair of trousers. The screen is filled with a board game that has been subdivided into blue tiles. You can walk over them, but only once! The will disappear when you've walked over them. Remember that! You have to collect them all... and don't get stuck! The randomly placed green rolling dam stones-like objects are also to be collected. But that's not all. The board contains three types of hazards. The first ones are the purple monsters, don't step on them or you 'll get killed. The second hazard is the Man With The Hat, who is moving around the board. Don't let him catch you! The third danger are the randomly placed bombs on the board. You have thirty seconds to disarm them by grabbing them. If all tiles have been collected and you didn't get stuck: congratulations! Your off to the next level! The game contains digitized speech, which you will hear when the game starts, when your walked into an hazard and at Game Over.