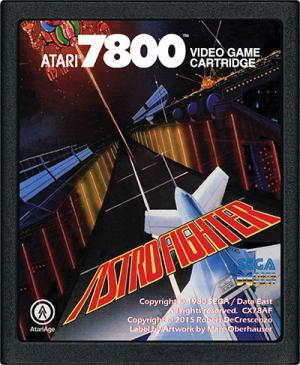 Astro Fighter is a two-dimensional, space shoot 'em up arcade game released in 1980. It was developed and published by Data East in Japan and was published outside of Japan by Gremlin/Sega. Programmer Robert DeCrescenzo has now brought Astro Fighter to life on the Atari 7800! Astro Fighter is a one or two player game of space adventure. Two players may take turns, competing for the high score. The player's warship faces meteor showers interspersed with four lines of enemy defense forces in an effort to reach the 'Master' and destroy it. Besides the challenges of fighting ability, the player's warship has an expendable supply of fuel that must last through the fight with the 'Master'.