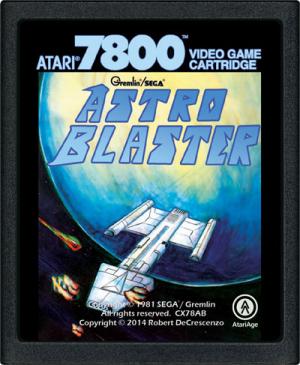 Astro Blaster is an Atari 7800 port of the arcade game of the same name, created by Robert DeCrescenzo, who has many excellent arcade conversions under his belt. In Astro Blaster, one or two players must advance through squadrons of alien ships in an attempt to dock with the mother ship. Players move their ship left or right and shoot at attacking squadrons. A special warp button allows the player to slow down the alien space ships and their laser fire, while maintaining his/her own ship and laser fire at normal speed. As players enter each new sector they encounter a different number of alien squadrons. Players must destroy all ships in each squadron to pass through the sector. One squadron of rockets is extremely difficult to destroy, but players can pass through this squadron by hitting a few enemy ships. Once a player has destroyed all the squadrons in that sector, he/she enters an asteroid belt. The player must maneuver and shoot his way through the asteroids to reach the mother ship. If fuel is critically low when the player enters the asteroids belt, he/she can receive extra fuel by shooting the red fireballs interspersed among the asteroids. After passing through the asteroid belt, the player's ship docks with the mother ship and refuels.