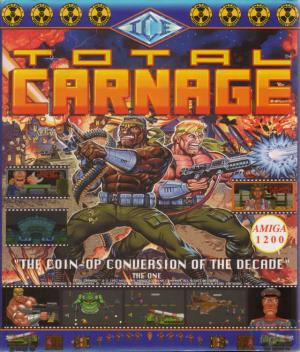 An evil Middle Eastern dictator named General Akhboob closes off his country to the rest of the world following a war in 1999. Hundreds of reporters flocked to the zone in hopes of getting a real scoop. Unfortunately for them, one of the reporters discovers that there's more than baby milk being made at the 'Baby Milk Factory'. General Akhboob then captures the reporter, as well as all the remaining reporters in his country. It turns out that General Akhboob has been building an army of mutants and a stockpile of chemical weapons. He's also holding several American reporters and other civilians captive. It is up to the Doomsday Squad, composed of Captain Carnage (Player 1) and Major Mayhem(Player 2), to invade Akhboob's base, wipe out his forces, destroy the mutants, rescue all the hostages and capture Akhboob. Along the way, Captain Carnage and Major Mayhem fight various mutants and monsters, including a giant cyborg named Orcus; get captured by Ahkboob's soldiers and put through his super-charged electric chair; arrive at the 'Baby Milk Factory' and destroy his nuclear capabilities; and finally confront General Ahkboob himself. Ahkboob transforms into several forms. After his defeat, he attempts to escape by releasing a swarm of clones, but is captured and then executed.