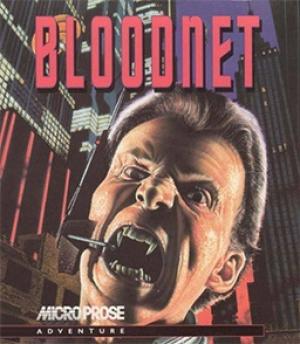 A mix of future tech and gothic vampire story, in the cyberpunk style, BloodNet puts the player into the role of a man named Ransom Stark, who must battle a vampire named Abraham Van Helsing who is attempting world domination and save both humanity and the cybernet. Ransom Stark was bitten by the aforementioned vampire, but is able to fight off the infection with the help of a computer grafted onto his brain stem. He must then embark on a journey to defeat the head vampire, Dracula, to stop the infection. The interface in BloodNet was standard point and click with some icon-based commands available from a drop down menu. The game featured a great deal of written dialog and puzzles, in addition to an open-ended travel system and random encounters. An alternate 'cyberspace universe' was also part of the gameplay, where codewords are needed to travel to different 'wells' (cyberspace locations). Role-playing elements were also present in Bloodnet: the player character and other recruitable characters for the player's party had number-based stats (such as Perception, Hacking, etc.), and combat was based on the player character's attributes and stats.