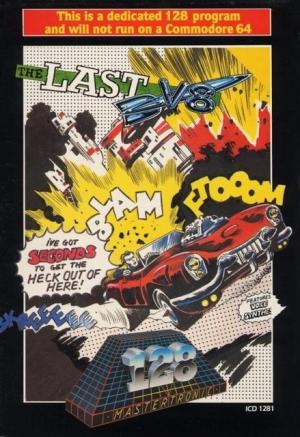 The Last V8 is a video game published by Mastertronic on their M.A.D. label. It was released in 1985 for the Commodore 64, Atari 8-bit and Amstrad CPC. The title echoes a plot point from the Mad Max series of movies The design was done by Richard Darling and the programming by David Darling. The graphics by Jim Wilson and music by Rob Hubbard. It is one of the few commercial games to run in native mode on the Commodore 128. The 128 version contained more levels (three instead of only two levels). The first level, the one missing in the 64 version, has more complex mission objectives.