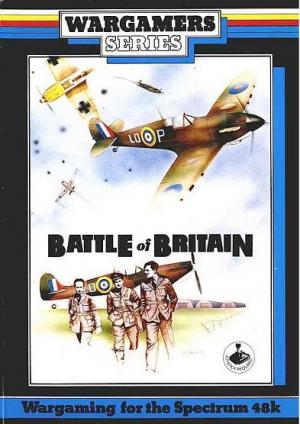 The first screen you will see after loading is the MAIN MENU: 1. WITH(OUT) ACTION 2. COLOUR (AMSTRAD ONLY) 3. CAMPAIGN 4. TRAINING GAME 5. BLITZKRIEG Spectrum Version: The first screen you will see is the JOYSTICK/KEYBOARD selection screen, Press 1 or 2 as required. BATTLE OF BRITAIN is compatible with KEMPSTON/PROTEK/+2 Interfaces. The keyboard controls are as follows: Q = UP A = DOWN I = LEFT O = RIGHT N = FIRE After selection you will then see the MAIN MENU: TRAINING GAME BLITZKRIEG CAMPAIGN ARCADE SEQUENCE - OFF/ON By moving the joystick up or down (or via Q/A) you will highlight each game option in sequence. The ARCADE SEQUENCE can be toggled on or off by pressing the fire button (or key N). Once your selection is made, press the fire button to take you into the game. 1. Action Sequence Selection The first option (1) (last option on the Spectrum) allows you to play Battle of Britain either with or without arcade sequences. The programme as loaded will be set to WITH ACTION. Pressing 1 will change it to WITHOUT ACTION, and no arcade sequences will appear. If you select WITH ACTION and don't wish to fight a particular battle simply press the space bar when asked to select "wich battle" (on Spectrum, to avoid fighting press the fire button while the cursor is over a "blank" area - eg. no airfields/ squadrons etc). 2. Monochrome/Colour Monitors (Amstrad Only) By pressing 2 on the main menu you can play the game on either a colour or "green screen" Amstrad. The default is colour. 3. Game Selection Options 3, 4 & 5 (2, 3 & 4 for CBM 64) determine which style of game you play. (i) Training Game: Pressing 3 (2) starts the Training Game. This takes place over one fairly light day of the campaign, and has been designed to ease you into playing the game proper. It is recommended that you play this game a few times and get to know the mechanics of Battle of Britain before attempting either the Blitzkrieg or Campaign games. (ii) Blitzkrieg: Key 4 (3) starts the Blitzkrieg game. This once again takes place over one day of the campaign, but the Luftwaffe have been programmed to give you as hard a time as possible. They will attack all your targets and will show no fear. Blitzkrieg is a very fast game and is not recommended until you have mastered the controls. (iii) Campaign Game: Key 5 (4) selects the Campaign game menu. This game is played over 30 days of the actual battle and has been designed to follow it as closely as possible in terms of Luftwaffe strategy. In the actual campaign the Luftwaffe attacks were split into 5 phases from July 10th to October 31st. We have condensed this by concentrating on the three main phases i.e., 2, 3 & 4. Careful study of this period will allow you to anticipate the program. We have also shortened the number of days from 54 to 30 and doubled the number of casualties in order to maintain the balance throughout the game. The campaign menu once again has five options. 1. LOAD DAY 2. SAVE DAY 3. START/CONTINUE CAMPAIGN 4. SPEED 1/2/3 5. RETURN TO MAIN MENU 1/2 LOAD/SAVE A DAY: As the Campaign game is played over such a long period, we have incorporated a LOAD/SAVE feature to allow you to stop playing at the end of any day and save all the data. You can then go straight to the next day the next time you play the game. To SAVE a day: Press key 2. Ensure there is a blank tape or disk in the machine and tape player is set to record. Press C if you are saving onto tape or D if you are using disks. When the day has saved the game returns to the Campaign menu.