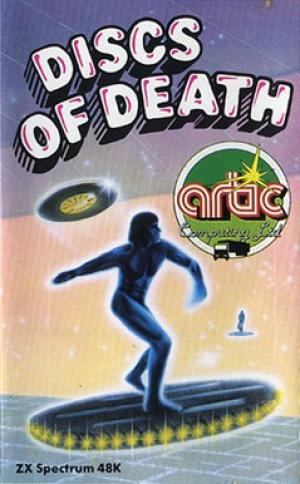 DISCS OF DEATH Can you retain the title of Disc Warrior Champion? Or will you, like so many before you, die by the disc. Excellent 3-dimensional graphics. Microvalue, Tynesoft Computer Software, Unit 3, Addison Industrial Estate, Blaydon, Tyne & Wear, NE21 4TE. Discs of Death -------------- It is the 25th Century... The aim of life is to become and stay the Disc Warrior Champion. Until now you have been undefeated in the arena. As the Champion you have recieved a challenge from a neighbouring planet. As always, it will be a battle to the death. Can you defeat the alien warrior or will you die by the disc? Use your reflector shields frugally, since they are limited. This 3-dimensional game has many levels - with features such as force fields and homing discs to overcome. Battle to score the highest possible number of points. To aim your disc, move the laser sights at the back of the playing arena. The disc will then aim for this point, ricochetting from the walls that it hits until it returns to you. May the Force be with you.