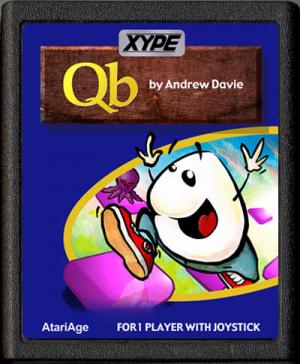 Qb was originally written for the Atari 800 by Andrew Davie back in 1984. Many years later, Andrew decided to port the game over to the 2600, and he finished his project in March 2001. The PhillyClassic Edition, limited to 50 copies sold only at the PhillyClassic 2001, was the first release of Qb. The object of Qb is to move the blocks around in the lower frame so that they match the upper frame. You can only jump between blocks when they are adjacent, otherwise you can only push them around. Fruit appears that you can jump on for points, but watch out for the monsters. In early 2002, AtariAge sponsored a contest to create a label for the limited run Qb Special Edition. The winning label was created by David Exton, and you can view all the submitted labels (over 100!) as well as the contest details on the Qb Label Contest page.