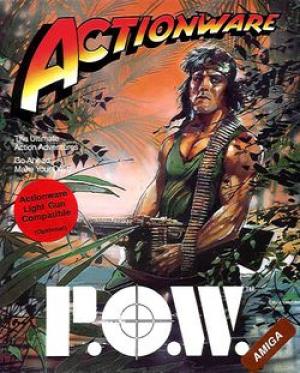 P.O.W. is the second light-gun game for the Commodore Amiga similar in style to Operation Wolf. The premise is to rescue a group of trapped US soldiers from hostile territory. The game takes place in following locations and terrains: jungle, bridge, village, armory, swamp, radio tower, prison camp and beach. Armed with your machine gun and a few rockets you must shoot enemy soldiers and vehicles (tanks, helicopters, submarines) while avoiding the innocent bystanders. You can also shoot bonus icons that include additional ammo and health. The screen is scrolling sideways and play became faster as the game progress. There are three levels of difficulty and three corresponding maps a player could follow.