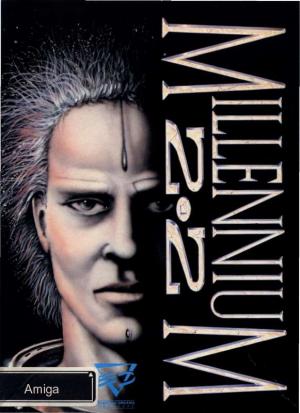 Manual: https://thecompany.pl/manual/254_millennium-manual.pdf This is a game that Activision are not quite sure how to categorise. The fact that it is not easily fitted into a convenient commercial slot is in itself a welcome sign that this is a game completely out of the ordinary. An asteroid has collided with earth, and the catastrophic damage caused to the planet has made it uninhabitable. Foreseeing such a possibility, Mankind had set up a self-sufficient colony on the moon. Its aim was to seek out useful-looking planets and moons, and using a technique called "terraforming", make them capable of supporting life. Now the race is on to "terraform" the earth itself. But before operations can commence, much research must be carried out, and supplies of minerals unavailable on the moon must somehow be obtained. The player starts out with the moon base at his disposal. A relatively minor affair, the base runs on batteries, mining what minerals it can. The solar system must be explored using unmanned probes, in order to find those planets which require life-giving elements. But before a probe itself can be built, a greater power source must be assembled first, and this too must be researched before manufacture. Once made, the base's energy supplies can be hooked up to it, and work on the probe can be transferred to the flight bay, prior to launch. When it arrives at its pre-set destination and is landed, the player loses direct contact with it. At this stage, research into the destination planet may be initiated. Later, if thought worthwhile, a craft of a different kind may be sent there, to establish a new colony. The problems in producing them become progressively difficult. More and more power is needed, and worse, a material shortfall of elements not available on the moon shows up. The mode of play is almost entirely by mouse. A picture of moon base forms a sort of top-level menu, and as the cursor arrow is moved across it, the function of each section is displayed, and can be selected by flicking. Going in deeper, if the research section is selected, a file-type graphic offers research into seven different types of project - energy, transport, weaponry, and so on. Since research and production take time, not to mention flights, the real-time clock of the game can be advanced by hours or days. Moving around from function to function to sub-option is very slick, with the one exception I found in the controlling of spacecraft. Exit from the control function is clumsy, and the requirement to intervene and auto-land a craft that has achieved orbit seems unnecessary. As time progresses, significant events are announced through the automatic display of a bulletin board, which can be accessed at any time for reference. The instructions in the manual are minimal. This is deliberate, for to give too much detail in them might give away some of the surprises the game has in store for you. Yet it is a little unrealistic to suppose that after researching a project you have no idea how it functions! This is the case for the various types of spacecraft available - it seems you must fly them and learn by experience how to use them. One thing that certainly wasn't clear to me at the outset, and is worth bearing in mind if you intend to play this game, is that only one project can be researched, and only one item can be in production, at any one time. Millenium 2.2, originally written as a text game for the PC by Ian Bird, was picked up by Activision as an ideal candidate for window and mouse interfacing. The resulting graphics are superb without being spectacular, and suit the mood of the game admirably. Similarly, the sound, consisting mainly of low-level sound effects, like the background noise of heavy mining machinery accompanying the resource screen, heightens the sense of atmosphere, as well as being an aid to identifying which option you're in. Arcade? Strategy? Adventure? You must make your own mind up - but be sure of one thing - this is more a long-term project than a game.