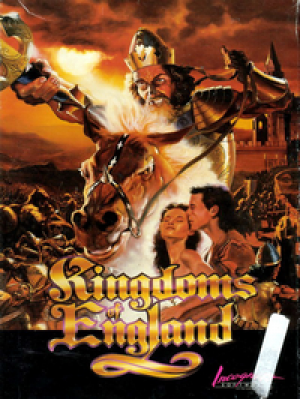 Kingdoms of England is a strategy game set in 1421. England is divided into 63 provinces and the player's goal is to conquer enough of them to become King of England. When playing alone there are four AI enemies to defeat and three additional human players can also join in. Everyone starts with one province and a starting budget. Money is used to buy troops or build defenses in a owned province and is earned through taxes. Troops can be divided and stationed in different provinces. When fights occur, there are two possibilities: a quick or a detailed mode. In the quick mode there are only a few basic decisions to take and the outcome mostly depends on the number of units and statistical factors. In the detailed mode, the player manually controls troop movements and sets catapult goals. Every six months there is a archery tournament, which plays out as mini game with manual aiming in first-person, with money as reward.