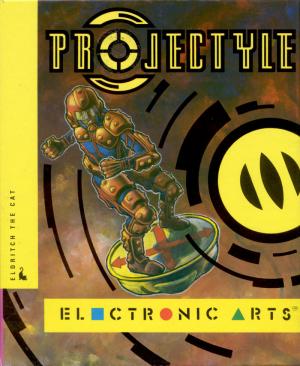 Projectyle is a single or multiplayer (1 to 3 players) hockey-type sports game of the future. It features smooth-scrolling, frantic action, colorful graphics and digital music. A total of five goal rooms, arranged in the shape of a cross, are connected with tunnels. The camera smoothly follows the puck/ball (the "projectyle") and scrolls to the adjacent rooms when entering one of the connecting tunnels. Each player, whether computer-controlled or not, has a room in which his own goal is located (their "defense" zone.) A fourth room -- the Frantic Zone -- contains a goalmouth for each player, while the central room, where action begins, allows access to the four other rooms. The object of the game is for each player to protect their own goal while trying to bring the puck/ball into the other players' rooms to score a goal. Bonuses appear randomly in the rooms, allowing the player who passes on them to gain some benefits, such as freezing the other players for a few seconds, gaining extra stamina, or sealing exits. The game supports up to 3 player simultaneous quick action single game play, and can support up to 8 players in leagues of varying lengths. League/tournament play supports player/team management, including training, injuries and position reassignment.