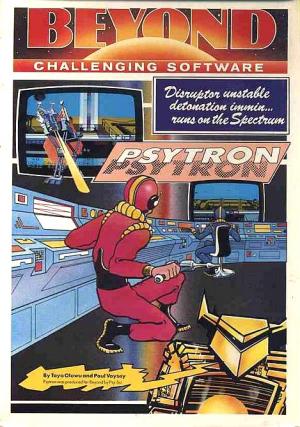 Psytron =========== The Psytron is in sole charge of the Betula 5 Installation. Its defence circuits are on the alert for intruders, its pursuit droid tracks down enemy saboteurs which infiltrate the base. It assesses the personnel's oxygen needs, it allocates food and work duties. Every aspect of the installation and the colony which supports it, is constantly monitored. Every need of its operatives ordered and catered for. Every sector visually scanned and the nitrogen-rich skies of Betula 5 eternally probed and warded. When the attack comes, the Psytron will cope with defensive demands and details which would leave a human brain unhinged, computer circuits scrambled. It must analyse every scrap of data which pours into it, for every aspect of the installation is interconnected. A failure in any department must be reported and its effect on the fabric of the base assessed immediately. Human lives will be expended as necessary but if the Psytron ever goes down... The objective ============= You will become the Psytron - less than human, far more than mere computer - and your mission is to survive the attack. Gradually your abilities will be built up level-by-Ievel until you are ready for The Final Conflict. Arcade style co-ordination and quick-wittedness combine with strategic understanding and tactical cunning in the Psytron. Each level has its own objectives and pass-mark but your ultimate aim is to process information as the Psytron would. To know the base as intimately,which areas must be defended at all costs and which can be sacrificed when the going gets tough. To spot the dangerous alien craft early, to use the Freezetime sparingly and to empty your circuits of everything but the survival of the Installation. There is a prize for the first conqueror of Psytron and there are more details of that on page 16. Loading instructions ==================== To load simply type LOAD"" (press the J key and the Symbol Shift and P key together twice). Then press, ENTER and PLAY on the tape recorder. Be sure the tape is on the "A" (Labelled) side - there's another game on the "B" side. Guide to the screen display =========================== A Gun sights. The target area is in the intersection of the lines. Target area -> - '- B An alien craft, close up having just dropped a bomb C. C A dropped bomb heading earthwards. D A ship in the distanceand almost out of sight and range. This ship is responsible for the explosion at E which is flashing and causing damage to the building at F. E The aftermath of a dropped alien bomb. F The outer buildings of the Oxygen Unit. G One of Betula 5's two moons. H Airlock 7 leading to the Recycling Unit. I A pursuit droid in the top airlock tunnel. J A saboteur beamed down into the airlock supply tunnel by the alien craft. It is heading for the airlock H and will explode there to cause maximum damage. K The pursuit droid's view of the tunnel with a saboteur shown running towards the droid. The tunnel curves around to the left to indicate the direction the droid is moving in. L Droid sight, fire when the saboteur moves into it. M Droid gun charge indicator. Green means it is ready for firing. Red means it is recharging. N Fuel scanner, showing how much fuel is left. O Crew scanner, showing the number of crew still being used to keep the station running. P Time so far elapsed (on the final level). On all other levels this reading shows the time left before the game ends. Q Damage indicator,shows the amount of damage done in a successful hit on an alien spacecraft. They are not always destroyed by the first hit. R Description of the building shown on the screen and the airlocks of that screen with an indication of the damage down to that level. This is held on the screen for two seconds each time a screen is entered. And this is then replaced by S. S A scrolling display of hits and damage, referring to each section of the base and its airlocks. Both R and S show damage as a bar-chart and percentage total. T Screen Report: A green number shows the screen you are on. Red or flashing green indicates a ship that has locked onto a target. The Screen Report title flashes when the supply beam is transmitting. U Droid Screen Report: The screen your pursuit droid is on is indicated by a green square. Red or flashing green shows a saboteur on that screen.