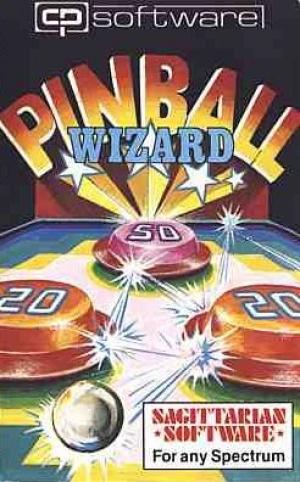 Pinball Wizard from CP Software Use the following keys: ENTER - To start game Q - T - Left flippers Y - P - Right flippers 6 - 0 - Launch ball M - Pause C - Continue Use any of the 6 - 0 to launch ball. Holding the key down for longer before releasing will increase the launch speed. Use any of the keys Q - T for operating the left flippers, and any of the keys Y - P for the right flippers. This allows one or two handed operation. M will halt the game without affecting play until C is pressed to continue. The top score is initially set at random to below 10,000. Hitting the targets marked HI will 'light ' the bumpers, increasing their value, and LO will cancel the lights and decrease their value. Hitting the HI targets with bumpers already lit will increase the value of the BONUS by at least 50 point. The BONUS can also be increased by hitting either of the central white rollover targets. Hitting any of the rollover target at the top of the board will light the letter above it. When all the letters are lit (spelling SAGITTARIAN) any of these targets subsequently hit will increase the BONUS by 50 point to a maximum value of FREEBALL instead of 1,000. Score the BONUS as described to obtain the free ball, cancel the lights and reset to 50. When ALL the letters are lit and the ball in play is lost, the letters will switch off although the BONUS if set to FREEBALL, will remain so until scored. There are also a number of random features including repeat BONUS increment and repeat BONUS score. By careful use of the flippers the ball can be manipulated to hit any of the desired targets and should it return down the launch tube it can be replayed as normal. With practice, scores over 20,000 can easily be achieved.