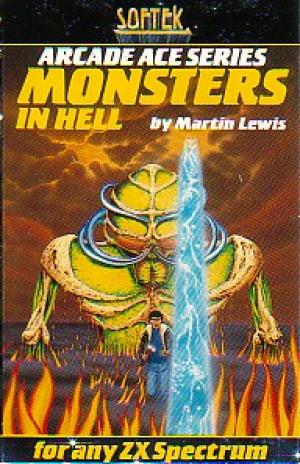 It's Panic! in a slightly more Dungeons and Dragons form. In other words, instead of digging holes and letting beasts fall into them, you dig holes and let wizards fall into them! CONTROLS Cursor Keys Q,A,O,P,zero Cursor Joystick INSTRUCTIONS Your stick-man is trapped on a single screen of levels and ladders. A warlock stands on the top left, creating minions which work their way towards you with the intention of draining your holy power! When your holy power is gone, you die, so it's generally not a good idea to let them get to you! To help you, you have some kind of magic hammer which you can use to bash holes in the floor. The minions are pretty thick and will fall down the holes if you lead them to them. Some minions will die from a fall of a single level, later ones are more resilient! Care must be taken not to fall into the fires of Hell which burn beneath the lower level, but on some stages the fire is the only way you're going to get rid of the nastier minions! Your holy power drains slowly, but you can replenish it a little by collecting the crucifixes that appear at random around the level. There is no end to the game, it just keeps getting harder and faster until you're dead! :)