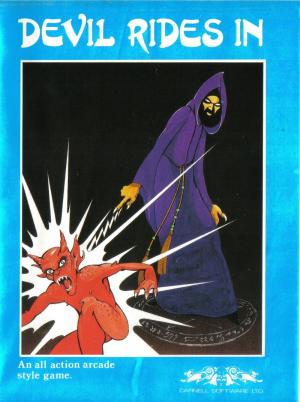 The Devil Rides In

The player takes the role of a wizard who is fighting against all manner of devilish creatures. The players character is in the centre of the screen inside a magic circle. Using the keyboard the player can move about inside this circle shooting spells at the creatures who lurk outside. The player cannot leave the protection of the circle as to do so means certain and immediate death. The player has three lives with which to complete the game. There are four levels of difficulty and six increasingly difficult screens which include ghosts, spiders, devils, skeletons, and the Angel of Death. The game can be played entirely with the keyboard or with a Protek or AGF joystick