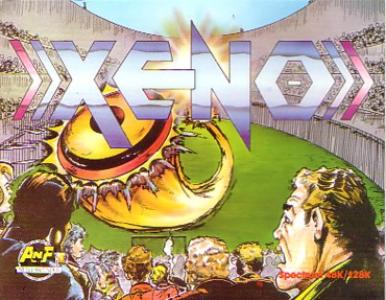 THE OBJECT. Xeno has one- or two-player, keyboard or joystick options. Each player controls a manoeuvrable disc in an attempt to push a smaller puck through his opponent's goal. The winner is the player who scores most goals in the game. SETTING THE GAME VARIABLES. You can vary certain aspects of the game to suit your level of playing ability. This facility gives Xeno infinite variability. DEFINING KEYS. If you take the keyboard option, Xeno will ask you to define each key function in turn. If you also choose two-player mode, be sure to define your keys carefully, so that both players can easily operate them without getting in each other's way during the course of the game. SETTING THE SHOT TIME-OUT. Control of the cursors showing the direction your saucer/disk will travel switches automatically from player to player after a pre-set time interval. This interval is the time- out period. It is entered as a single number of seconds, from 1-9. By entering 0 you can disable the time-out facility. SETTING THE LENGTH OF QUARTERS. Xeno is played in four quarters of equal duration, which may be varied from 1-9 minutes. SETTING THE COMPUTER HANDICAP. You can handicap the computer by slowing down its response to you shot. The handicap values range from 0-9. The Xeno program has default settings. Follow the screen instructions if you wish to change these. You are no ready to play Xeno.