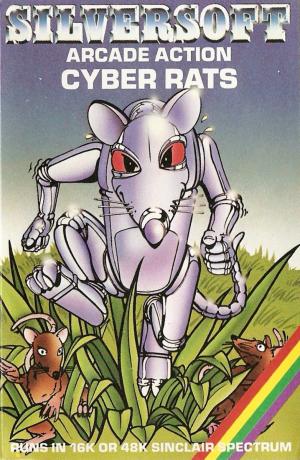 When relentless swarms of metallic rats start terrorising the neighbourhood, the call is put out to find someone who can try to put a halt to this unending rodent menace. Maybe you'll fare better than most. With a gameplay mechanic very similar to the various Centipede games, the player controls a gun that can move across the bottom of the screen. However, unlike Centipede where the enemies are long segmented creatures that could be shot into smaller components that would then individually precede down the screen, in Cyber Rats the enemy starts off as single entities. And similar to the mushroom littered playing field of Centipede, here the playing field contains random pieces of grass that the rats will deflect downwards from if their side-to-side progression down the screen causes them to encounter them. Destroy each wave and the game will progress and another wave of rats will instantly appear on screen. Just keep on playing, racking up a high score, until you run out of lives.