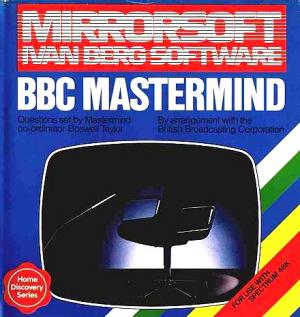 BBC Mastermind is based on the quiz show Mastermind. In this game up to four players compete in two rounds of questions where they must answer as many questions correctly as they can in two minutes. In the first round, the players are asked questions based on their “specialised subject” and the second round is a General Knowledge round. In this version, the specialist subjects can either be Films and TV on side A and Sport on side B. Every correct answer scores you one point. To save time players may pass a question and move onto the next one. Should the two minutes expire by the time the current question is asked, the player is allowed to give their answer. At the end of the two rounds the player with the highest score is declared the winner and Mastermind champion. A Mastermind Quizmaster was also released, which allowed players to create their own questions and subjects and save onto a tape to load into the main game.