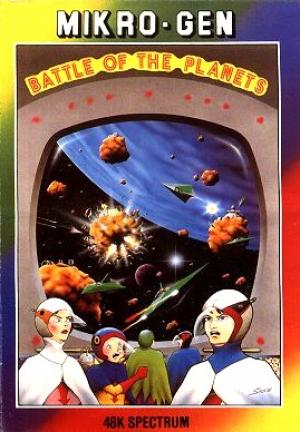 Battle of the Planets

Battle of the Planets - Operating Manual ---------------------------------------- ZOLTAR has declared Galactic war in your universe, which consists of five planetary systems which are: 1. XENATH 2. ELIAS 3. HORAF 4. OLIXAL 5. PETE Alien space craft surround each planet and after a certain time lapse they will land on the planet and destroy the Civilization/Life on that planet. Your performance in space will limit the amount of alien craft landing on the planet in that system. On the planets you will repair and fuel ships that you may dock with in order to replenish and repair your space craft. Your space craft is equipped with a laser system, neutron torpedoes and a long range scanner. The long range scanner has three main indicators that appear on the screen edges. {See fig 1 of BattleOfThePlanetsInstructions.GIF} Also there are two other symbols displayed on the screen these are: {See fig 2 of BattleOfThePlanetsInstructions.GIF} Whilst on the planet the long range scanner will show the repair ships by a spanner and wrench symbol and the fuel ships by a fuel can symbol. Navigating your ship through a Hyper-space gate will enable you to jump to other planetery systems. In order to intercept either the hyper-space gate, alien space craft or one of the planets move the navigation cursor/laser sights via the directional controls towards the craft in that direction. When an alien space craft is located, the navigation cursor/laser sight enables you to direct your laser fire. Excessive use of your laser system will cause a system failure until the temperature falls to an acceptable reading. The remaining energy of the laser system is indicated by the cell reading. Both the laser temperature indication and cell readings are available on status screen 5. Status screen 4 provides details of your neutron torpedo armament. Planet data on status screen 3 reports on the Landers (Alien space that have landed) and the amount of planetary life still remaining, which will decrease and will eventually be completely annihilated unless you locate the landers and destroy them. If you fail to do this the planet will be destroyed. THIS WILL RESULT IN YOUR OWN DESTRUCTION. When you wish to leave a planet increase your thrust and head your ship upwards by use of the navigation cursor/laser sights. Status screen 2 gives details of your power unit, which comprises of fuel level, thrust and power unit temperature. Excessive thrust will cause your power unit to overheat and an automatic cut-out will overide your thrust until the temperature returns to an acceptable level. Your shield level is indicated on status screen 1. Left, Right and Forward shields are all indicated.