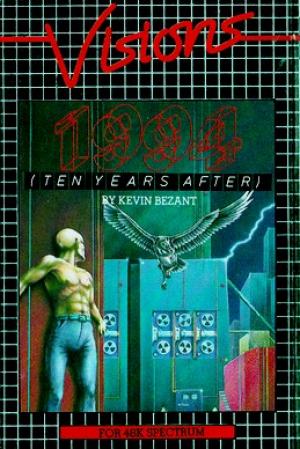 Hi, my name is Smiffy (no relation to the other one), the trouble is, Mr Orwell got it all wrong, not the principle, mind you, just the date. It all happened 10 years after i.e. 1994. The bane of my existence is the Central Computer. In fact, it's the bane of eveyone's existance. So, being of inventive mind and adventurous nature, I decided enough was enough. I was going to switch the Computer off. Easier said than done, though. In this case I very nearly was (done, that is). Stepping out into the corridors of power which housed this Omnipotent beast I found that all was not sweetness and light: in fact, there was not very much light and very little of it was sweet. In short, I was soon dodging plasma bolts from the spy cameras, jumping over the infamous 'jelly droids' (no trifle, I can assure you), leaping in and out of lifts, and generally having a very paranoid time of it. How I ever managed to achieve my aim I'll never know, so I'll leave it to you to find out. There are only either levels of play, plus a host of hazards I haven't even mentioned. You'll learn - it will take time, but you'll learn.