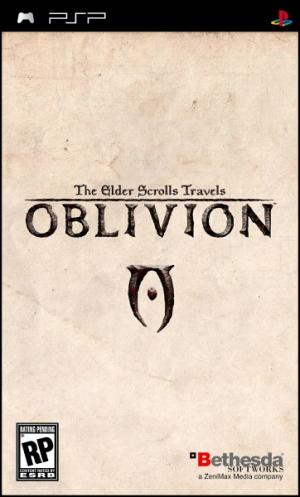 The Elder Scrolls Travels: Oblivion was a cancelled PlayStation Portable adaptation of the action/role-playing game, The Elder Scrolls IV: Oblivion. The PlayStation Portable version takes place in a different setting along with a new and original story. Oblivion comes to the PSP with all your favorite free-form gameplay, unprecedented graphics, cutting edge AI, character voices by acting legends Patrick Stewart, Sean Bean, Terrance Stamp, and Lynda Carter along with its award-winning soundtrack. Gamers can choose to unravel Oblivion’s epic narrative at their own pace or explore the vast world in search of their own unique challenges. After the mysterious and untimely death of the Emperor, the throne of Tamriel lies empty. With the Empire ready to crumble, the gates of Oblivion open and demons march upon the land laying waste to everything in their path. To turn the tide of darkness, you must find the lost heir to the throne and unravel the sinister plot that threatens to destroy all of Tamriel.