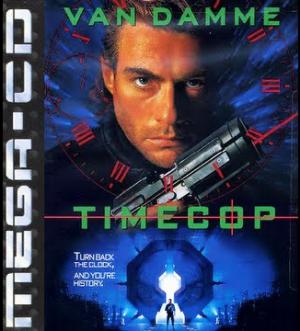 Timecop is a side-scrolling action video game produced by Cryo Interactive for the Super Nintendo Entertainment System in 1995.[1] It is based on the 1994 film of the same title and takes place after the events of the film. Despite the use of digitized actors to portray the characters in the game, an actor other than Jean-Claude Van Damme was used to pose as protagonist Max Walker. Levels range from locales in the past (e.g., New York City during the 1920s, the European front of World War II), the present day, and a dystopian Los Angeles of the distant future. Although the game was only released for the Super NES, a version was also developed for the Sega CD, with a short demo being distributed in May 1995 alongside the European Sega Pro magazine.[5] Despite being fully completed by the developer, JVC pulled off the Sega CD version publishing and it remained unreleased. In 2007, a complete version of the game was eventually released on the Internet by the Sega CD version coder.