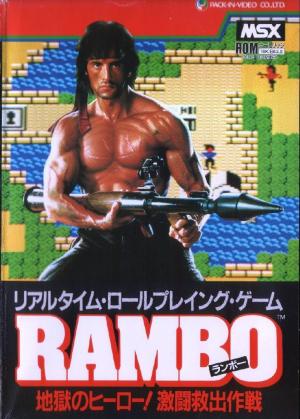 The first Rambo game in the series to be released on the MSX features Rambo with an arsenal of weapons and grenades on well guarded military grounds, and is similar to and based on the movie. Your main objective is to rescue the girl from captivity. You start out with only a knife in this game, but as you progress you will end up with several different weapons, including a rocket launcher. There are some "puzzles" in the game where you have to figure out how to get across to a certain area without putting yourself in fatal danger. You fight riflemen, archers, snakes, and other baddies. A few different endings are offered in this game depending on how you choose to rescue the girl, the best ending - being able to escape with the girl safely.