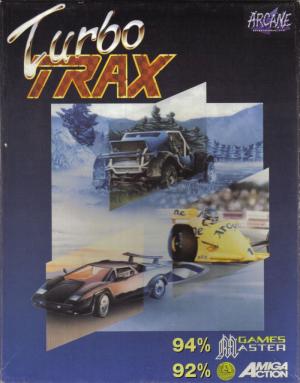 Turbo Trax is a top-down racing game. The main game mode involves competing against five other competitors across a variety of different surfaced tracks such as dirt, racing circuit, ice and city. Each track has hazards such as oil slicks that will slow cars down, and turbo booster icons that will speed the car up when it's driven over. The player can collect money that is scattered around the tracks in order to buy tuned parts for their car. Before each race the car's setup can be adjusted for the conditions.