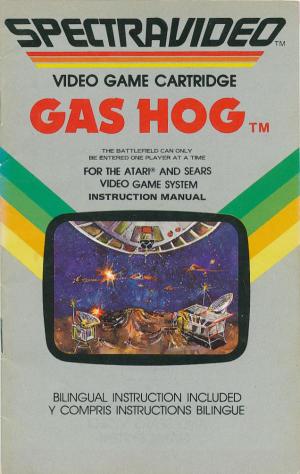 You are in your vehicle which has terrible fuel efficiency. A real gas hog. You are trying to travel along but there is one or more ships above you that are trying to bomb you. To make things worse, there are holes in the road and other ships you need to shoot so as to not ram them. As you go along, you can accelerate or decelerate to avoid being bombed but be careful because you might ram some ships near the ground. You can jump to avoid them or blast them for points. You will also see numbers along your way. Run into them to acquire their point value. Do not shoot them or their value will be deducted from you score. As this is Gas Hog, you will soon run low on fuel. You must get below ground via the occasional holes, to grab a refuel marker. Do not stay below ground, however, as you travel in the wrong direction while there. You start with four lives and lose one if you are hit by a bomb or ship or run out of fuel. (Moby Games)