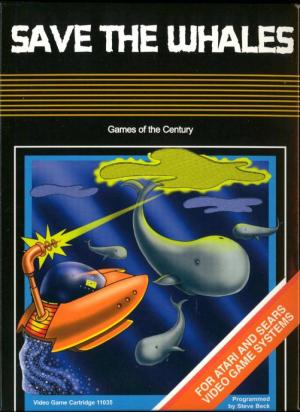 After much rumor and speculation about its existence, a prototype for this game was finally found in early 2002. Save the Whales had long been rumored to have been playable on the short-lived Gameline network, although nobody could actually remember playing the game. Was it worth the wait? Did it live up to expectations? Not really. You control a submarine that must "Save the Whales" by shooting the harpoons or nets thrown by the ship at the top of the screen. You can choose between harpoons or nets by changing the difficulty switch, harpoons are smaller and faster than the nets so they're harder to hit. If a harpoon or net hits your sub you'll have some damage, if you take five hits it's game over and all the whales die!