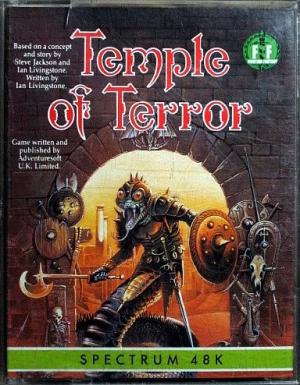 You are a solitary adventurer, chosen by the sage Yaztromo to save the land of Allansia from Malbordus, the sinister champion of the Dark Elves, by beating him through the inhospitable wastes of the Desert of Skulls to the fabulous lost city of Vatos. There you must brave cruel monsters, ancient deathtraps, fanatical disciples of the cult of Leesha, and the cat-and-mouse depredations of the sinister killer known as the Messenger of Death in your quest to recover the powerful Dragon artefacts before Malbordus can find them and utilise their mystical power to fuel his campaign of carnage. A loose adaptation (using many of the original's characters, locations, situations and puzzles but often in new configurations) of Ian Livingstone's Fighting Fantasy gamebook #14, published two years prior, this computer game version merges the gamebook's Choose-Your-Own-Adventure design to the Adventure International text-game-with-graphics model developer Adventure Soft had grown familiar with republishing. This curious hybrid yields some alternate puzzle solutions that wouldn't have been possible in the original gamebook format, but often imposes extraneous constraints such as carry limits and step-by-step sequences of actions that the book would have effortlessly bundled together in a single multiple-choice paragraph selection. Curiously, considering the ease with which computers automate data management, the designers chose to reject the trademark Fighting Fantasy SKILL, STAMINA, LUCK RPG stats-management -- distancing the conversion from unfair elements of randomness but placing a new emphasis on adventure game inventory puzzles.