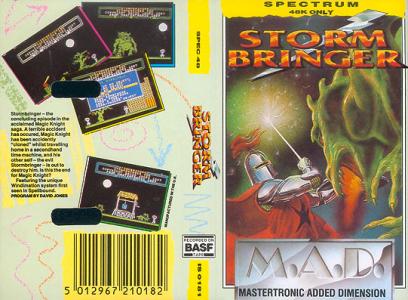 Stormbringer is the fourth and final game to star Magic Knight, and the only one to make it onto 16-bit systems. Magic Knight must meet with his alter-ego, the Off-White Knight, by reaching his castle hideout - which means clearing 64 screens of adventure. As with the rest of the series, the game uses a largely visual system, in which a press of the fire button calls up a menu of options, such as 'examine', 'pick up' or 'cast spell. Selecting these calls up a sub-menu to choose what should be examined or thrown, which objects to combine, which spells to cast, and so on. The objects to be used include a chicken, a disguise, and eggs. One new feature is that bolts of lightning are fired down at Magic Knight from the sky, and these must be avoided.