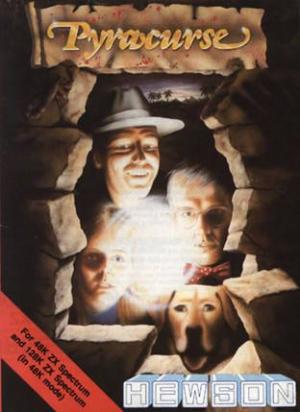 Pyracurse is an isometric 3D arcade adventure game released by Hewson in 1986 for the Sinclair Spectrum. The archeologist Sir Pericles Pemberton-Smythe has disappeared while exploring the mysterious ruins of an ancient city in the forests of South America. The player must lead the rescue party to the missing scientist and then escape the haunted city and its sinister guardians. The player controls the four members of the party, each of whom have different abilities: 1. Daphne Pemberton-Smythe, daughter of the missing archeologist (good at finding things) 2. Professor Roger Kite (clever but naive and prone to getting lost) 3. Patrick "Legless" O'Donnell, a journalist with a drink problem (strong but clumsy) 4. Frozbie the dog (can find buried objects) The characters are controlled via the keyboard or joystick in Mobile Mode. Pressing "fire" activates Selection Mode: a menu system which is navigated by the "right" and "left" commands. The "up" and "down" commands return the player to Mobile Mode. Selection Mode allows the player to choose another character to control, use objects, or toggle the character mode between "SOLO" and "LEAD", the latter option causing the computer controlled characters to follow the player's character. Useful objects are scattered about the city, and can be picked up by simply walking over them. Certain objects can be thrown as weapons by selecting them in the inventory window, and then pressing "fire" while moving in Mobile Mode. This procedure is also used to drop unwanted items. Different characters use objects in different ways (e.g. Patrick and the Professor can throw further than Daphne.) Many different monsters can be found guarding the city. Some will ignore the party unless approached. Others will actively pursue interlopers on sight.