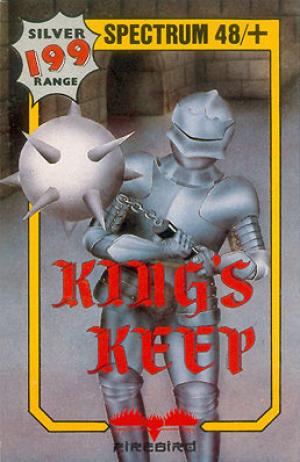 Harold is a very nasty King. He rules his kingdom by bullying the inhabitants and locking up their cabbage patch dolls if they're naughty. However, King Harold has a son who is a little more broadminded than his dad. Harold's son objects strongly to the way that his dad rules the country. But King Harold knows that his son has sympathies with the locals and won't let him out of the castle in case he tries to start a rebellion. So Harold's son will remain a prisoner for ever and ever unless you can help him to escape from his father's evil clutches. Harold Junior really wants to escape from his father's tyrannical rule, but first be has to find a way out of the castle. Old Kingy has been very sty and has blocked up some doors and made moving around the castle very difficult. Luckily Harold junior is a smart lad, and by using everyday objects which he comes across on his travels, he can attempt an escape. When the imprisoned prince enters a new room in the castle, the location scrolls across the bottom of the screen. In the same way conversations can be carried out with the various characters who live in the castle. These characters often give Harold's son hints and tips regarding which objects are useful to collect. There are options to give objects, examine them fully and use them. The conversation with the characters can be carried out by selecting the TALK option. Harold Junior moves around the castle on foot, but he does have quite springy legs which is just as well really, because some rooms can only be entered and exited by way of platforms and large jumps.