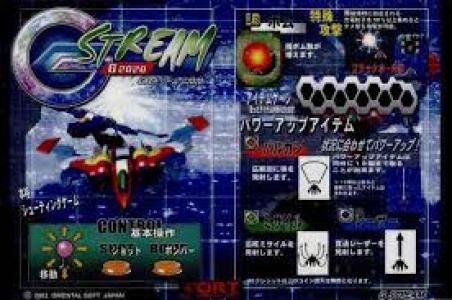 G-Stream G2020 was manufactured by Oriental Soft Japan in 2002 and released same year for the Arcades. Oriental Soft was a very short living company, known mostly for manufacturing a Strikers 1999 like game, 1945k III which is an obvious rip. G-Stream is their second and the last game, studio was dissolved short after. In G-Stream G2020 we play as a ship that has got customizable weapons - there are 3 main powerups and you can collect to a maximum amount of 10 various primary gun powerups. From standard spreadshot gun, cutting laser and homing missiles you must do a mashup between them to balance your firepower, the way you like. Game is unplayable on older MAME releases, expect slowdowns in some situations though.