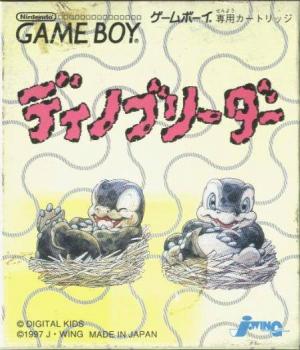 Released in 1997 for the Game Boy. Dino Breeder is a virtual pet game developed by Digital Kids (later known as Ubisoft Nagoya) and published by J-Wing for the Game Boy platform. In Dino Breeder the game starts with the player being able to choose one of six different dinosaur eggs. The player then gets to keep whichever dinosaur hatches from the egg and gets to name it. Once players have chosen a dinosaur it can be fed, trained, or get into a battle. There is a story which can be progressed through by meeting certain criteria. Dinosaurs have a set amount of hit points and if they are taken down to zero they will die leaving players the option to start the whole game over or start again at the last checkpoint with the current dinosaur.