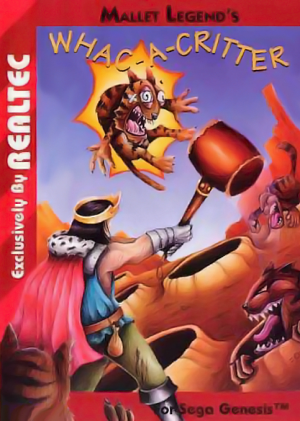 The princess has been kidnapped by a strange creature! What to do? Grab a mallet and bash heads in until you can get her back, that's what! Mallet Legend's Whac-A-Critter is based on the classic coin-operated redemption game Whac-A-Mole. Each stage has nine holes, out of which various creatures appear. The player must hit as many of the "bad" creatures as possible, while leaving the princess and the dog untouched. Some creatures wear helmets and must be hit several times to be defeated. Between each stage, there are minigames where bonus points can be earned, and there are six stages total. Also supported is a special nine-button "Smash Controller" specific to this game.